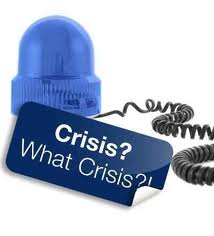 Crisis Prevention: Why Don’t We Have a Crisis Communication Plan?

Here’s what I think:  Crisis prevention isn’t sexy. It’s boring.  And denial is far too easy.  ‘That will never happen to our company’ is an all-too-common excuse for not investing in a crisis communication plan. These days, when employer-employee loyalty is a relic of our parents’ generation, who’s going to bother to argue with the boss when she/he denies there’s a problem? The sand is right there at our feet, let’s just stick our head down into it. See? No crisis.

Crisis Prevention Does Not Get Headlines

This is the reason, I believe, that so few politicians seem to support initiatives that are designed to prevent problems.  Prevention does not get them a headline.  But fixing a problem, now that merits news coverage. And campaign contributions and votes.  Too many are happy to stand up and talk about how they have solved a problem, but far too few are willing to work on preventing it from happening in the first place.  But I’m not here to talk politics.

The same is true for organizational crises.  Take United Airlines’ recent PR disaster, which occurred on April 9 when a passenger was forcibly removed from a flight because the airline needed the seat to transport a crew member to Louisville from Chicago, and too few passengers volunteered to give up their seats for compensation.

United has had to apologize for how its policy was enforced, and is enduring an ongoing PR disaster of its own making. Their apology — which improved somewhat over time and under intense social media pressure– failed to adequately acknowledge their poor initial handling of the incident, when they hid behind policy and blamed the passenger.

Perhaps CEO Oscar Munoz, having come from CSX, just isn’t attuned to a people-centric (rather than cargo) transportation business. His tone-deaf initial response on Monday certainly exacerbated an already embarrassing situation. What we don’t know is whether Mr. Munoz got bad advice on how to respond, or if he ignored good advice. Or worse, sought no counsel at all. But I believe that the right message, at the right time, would have contained the crisis quickly and we would be talking about something else by now.

But crises like this only happen at big companies, right? They are the ones always in the news.

Executives of smaller companies often believe that they are too small to capture news headlines, and therefore they don’t need to worry about a crisis.  “It won’t happen to us.”

The fact is, though, that a crisis can bring down a smaller company and never be widely covered by the mainstream media.  An issue becomes a crisis when your stakeholders find out about it, and share the story with others. Media coverage certainly won’t help the situation, but it is no longer the sole means to access news and information about your organization. In fact, it is not even the primary way to get information. That role has been assumed by social media and the internet.

So, what’s an executive to do?

Let’s start by pulling our heads out of the sand and acknowledging that yes, we are vulnerable to a variety of potential crises. It can happen at our organization. It will happen sooner or later.  Time to make the commitment today to prepare and prevent, so we don’t have to repair and repent tomorrow.

Invest in a comprehensive crisis communication plan.  It’s an ounce of prevention that will save a ton of cure in the long run. Begin with an honest assessment of the organization’s vulnerabilities to determine the kinds of crises that the plan should address.  Evaluate the issues, problems and disruptions that are most probable or most impactful.  Our research has consistently shown that most crises-to-be are smoldering issues that could have been prevented, managed or mitigated well before erupting into a full-blown crisis.

Crises are about people.  Crisis communication plans are like insurance policies: you can hope for the best, but plan for the worst and minimize your exposure to risk. Hope that the catastrophe never happens, but be prepared just in case it does.  Because it just might.

Include these crises in your plans.

There are several crisis scenarios that should be addressed in virtually every plan, including: harassment, abuse or discrimination; illegal or unethical behavior; whistle-blowers; white collar crime; cybercrime / data breach; employee or customer casualty or fatality; natural disaster; workplace violence (including terror attacks and shooters); product recalls; labor disruptions; activist or social media attacks. Employees caught on smartphone video behaving badly.  There will likely be a few other issues specific to the company or industry that should be included.

Develop initial strategies for each of the scenarios and identify the crisis team members, communication priorities, key stakeholder groups, likely questions and initial messages. Prepare holding statements and social media messages, and have them vetted and approved by legal and management in advance, so they can be used immediately if needed.

Once the plan is completed, teach the crisis team how to use it.  Conduct an exercise to make sure the plan works as intended, and that it integrates well with emergency response plans and business continuity and recovery plans.   Review and exercise the plan regularly, at least annually.

While you’re at it, take a good, honest, possibly painful look at your culture, and determine whether it encourages employees to speak up when they see a problem.  If not, change the culture. This is much easier said than done, of course.  But the kind of crisis-ready, adaptable to change, employee-friendly and customer-friendly culture that prevents crises can also make the organization more nimble and ready to change in the face of new and unforeseen challenges.

Learn more about the kinds of crises that made the most headlines in 2016: download our free annual crisis report.   Ready to dive in to this important crisis prevention work? Contact us now.